"I've been the ultimate model her for years. The Top Dog, you might say. (laughs) But it's always a pleasure to work with new colleagues."
—Tangier, Some Assistance Required

Tangier is a professional model dog for the Tres Blasé magazine. The toyline gives his name as Tangier Kingston.

Tangier showed to be pretty welcoming when Russell and Zoe came to the pet modeling studio, and even complimented the latter about her many previous works for posters and billboards. Russell thought he seemed really nice, but Zoe became suspicious.

When Russell's sneezing ruined a shooting session, Zoe discovered the hedgehog's scarf had been covered in sneezing powder, which happened after Tangier helped Russell to fix it. She then decided to expose his acts to Oliver, the head of pet modeling.

Tangier tried to further ruin Russell's modeling career by putting hot sauce on his food. Even though Russell did eat it (and managed to breathe fire), Zoe managed to catch Tangier at work with a camera, granting him a time-out from his career.

Frustrated, he later accidentally fell for his own trap and ate from Russell's bowl, resulting in him spitting out fire just like Russell. 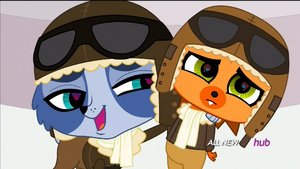