"But all those animal reality shows do is create drama and make everyone look silly."
—Blythe

Terriers and Tiaras is the twenty-first episode of the first season of Littlest Pet Shop.

Blythe agrees to appear on the reality pet pageant show, only to discover that the competition brings out the worst in people.

One day, at Littlest Pet Shop, a man walks in, asking for directions to Littlest Pet Shop. Blythe asks him if he is sure he would not rather shop there, but he informs her he came in search of "talent" for a show he is part of titled Terriers and Tiaras. She starts to give him directions, only to be interrupted by Zoe. She excuses herself for a moment so Zoe can ask her to be put on the show. Blythe is against it since reality shows are just all about drama and she points out they would have to get permission from her owners. However, after being handed a signed letter from them (that Zoe had on person), she caves in after being forced to look at Zoe's ultimate weapon: Puppy dog eyes. Blythe grabs Zoe and shows her to the man, claiming she would be the talent he is looking for.

The next day, Judi Jo Jameson, one of the contestants, has arrived early with her prized pooch Princess Stori Jameson. She seems to be very eager once the camera crew show up, covering her much more poor behavior moments before then when she bossed her assistant around. She begins to describe how good Princess Stori is, then snaps at her assistant before explaining she is firing her after she wins the competition.

The director reveals the crown that will go to the winner of the pageant and introduces everyone competing in it, including a woman who spoils her pup, a really tough woman who overworks her dog, and a camera-frozen Blythe. Due to her behavior, he admits it could be problematic for the show, but suggests she watches Judi Jo since she is so talented at this. It goes fine at first, but when Zoe gets too excited and makes too much noise, the director snaps at Blythe to quiet her down. As Judi's snobby side begins to show, Blythe decides to cancel and tries to leave. However, the others convince her to stay and they come to a stage where the show will take place.

Eventually, everyone goes to the room where training and the physical tests of the pageant take place. Blythe gives her advice, but Zoe insists she does not do athletics since she is more of an artistic type of dog, being good at singing and fashion. However, they try to get her to do it by showing her how fun it can be. Minka goes over the course while the other competitors watch and mock her, so Blythe makes Zoe go through it just to prove how talented she is. However, this goes about as well as expected.

After the mean trio leave, Phillippe, Judi Jo's assistant, is given an interview for the time being. She introduces herself and explains how she basically does everything and anything for Princess Stori and her owner, but she had originally been hired to play and have fun with Princess Stori. Before she can say anymore, she is hurried away by Judi.

Everyone begins to groom their dogs. Blythe watches as Judi Jo "properly" shows how to groom Princess Stori and Blythe takes her words to heart by doing what she does, but to Zoe. She makes a pretty hair style with her, but the pets are less then receptive by it. She then takes the makeup next, but the others think she may be overdoing it.

Eventually, the pageant arrives and they start with the pets talents. As this goes on, Blythe takes a moment for an interview, but gets severely told off by Judi during it. As a result, Blythe tells her off in response and leaves the room. Russell and Minka help Zoe train. However, when Shea Butter and the other dogs come along, Zoe instantly quits to compliment them. The dogs are very nice and responsive, but admit to not really enjoying this life and leave once Zoe questions them regarding their behavior towards having fun. It is then Blythe walks in and starts to boss them around into hurrying up to get to work.

Zoe goes over her talent of dancing to music, but Blythe is very quick to shoot it down and claims Zoe needs to try harder if she wants to win. She then tells Zoe what she should do before making her dance to it and the moment she makes a mistake, she yells at her. Russell and Minka take the time to comment on how ugly the situation has become.

As Blythe starts to harass other competitors, the dogs watch this behavior and mention that Blythe is becoming like their owners. Zoe tries to defend her by saying she is excited, but this does nothing. They claim their owners used to want to have fun as well, but then turned into what they are now. It happens to everyone at some point or the other. In disbelief, Zoe tries to speak to Blythe about this and admits to being nervous and asks her for encouragement. However, Blythe instead reveals the outfit she picked for Zoe, which is quick to send her to tears when it is revealed it was originally her birthday dress. Blythe changes it so it looks better and claims how ugly the old dress was. This serves as the final straw for Zoe, who decides she does not want to be in the pageant anymore. At first, Blythe does not buy it, but leaves to speak to the other owners while Princess Stori goes to speak to Zoe.

Much to her amazement, Princess Stori is revealed to be a boy. She asks him why he would bother to put up with this if he does not enjoy it and he admits that it makes his owner happy. It is then they are joined by Shea Butter and Sam U.L. They tell her they want to be like normal dogs and do not find this fun anymore, so Zoe suggests they all just quit. Before they can leave, Zoe and Princess Stori are snatched up by their owners and forced to get onto the stage.

In a surprising turn of events, Zoe suddenly stops her performance and tears off her clothing, storming off of the stage while an angry Blythe follows her. As Blythe searches for Zoe, she tries to fix her up for the stage again. Zoe tells her how serious she is being and does not care about the pageant anymore. Blythe has gotten out of control and it is not fun anymore. Blythe tries to respond to this, but Zoe takes off and Blythe replaces her with Russell.

In the other room, the director shows Blythe how much of a monster she has become lately. He also mentions how enjoyable it is and how good for ratings it has become. It is then Blythe is able to realize what she has become because she notices that the pageant put a spell on her. She is then interrupted by Princess Stori and Judi Jo, who run into the room. She begins to threaten Princess Stori while claiming it to be Blythe's fault that she is even behaving like this to begin with. She insults her and claims she is a bad pageant mom, but then storms off after Blythe informs her that Princess Stori does not want to be in pageants anymore. She gives Princess Stori over to Philippa and the two are much happier now.

Blythe apologizes for her stage mom behavior and Zoe claims that while she may not care about the crown anymore, they can all still go have some fun, so they run back to the obstacle course. Philippa is given an interview regarding her new ownership of Princess Stori. She incidentally slips up in calling him a "her", but is quick to apologize and embrace her brand new pooch.

The director goes on to announce the winner of the competition: Russell. This is because he was the only pageant dog who did not run off. This makes everyone surprised, but they quickly accept it and cheer for him as the episode ends.

Mitchell Larson wrote his first draft of this episode entirely as if it was an episode of the Terriers & Tiaras pageant show because he forgot that only Blythe could hear the dogs.Mitchell Larson on Twitter 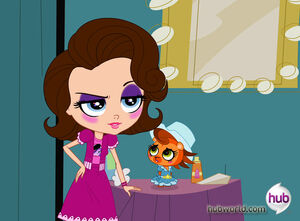 Click here to go on Terriers and Tiaras image gallery