The Expo Factor - Part 1 is the twenty-fifth episode of the second season of Littlest Pet Shop and the fifty-first episode overall.

Blythe is majorly stressing about the upcoming International Pet Fashion Expo and her concerns increase dramatically when she is asked to do a photo shoot for Très Blasé.

The episode starts with Blythe running through the International Pet Fashion Expo, trying to reaching her kiosk in time before the judges come to see it. On her way she meets her best friends, one by one: Youngmee, Sue, and Jasper. Each of them holds a watermelon while telling her she is late and about to be disqualified. When she finally reaches the kiosk, she finds out it is empty and the judges are already there. Soon, to add insult to the injury, the camera reveals that Blythe is also in her pajamas, holding a teddy bear.

Blythe woke up in her bed with a cold sweat running down her face. It was just the "empty kiosk, me wearing pajamas and my friends holding watermelons dream... again!". Those worries about the International Pet Fashion Expo were really getting to her. Later that day, she told Emma about her nightmare, and she offered that it was just her subconscious trying to freak her out. Apparently, her subconscious was doing a really good job. And, to add to her worries, she received a call from Mona Autumn personally. However, instead of being another source of stress, it was actually a relief: Mona said she would like to make an article about Blythe and her designs in her famous Très Blasé magazine. She required Blythe to do whatever she wanted and take any pets she liked to the photoshoot for the article. The news gets Blythe excited and she immediately goes to tell the pets. That makes everyone of them really excited, except for Russell, who claims to be more of a "behind the scene" type of person. However, a bit later, Mona calls Blythe again, saying that due to being short on time, only one pet shall be allowed in the photoshoot.

Meanwhile, Littlest Pet Shop had a new visitor: A cat named Delilah. The pets got around her and introduced themselves. Soon, it had been discovered that Delilah, just like Zoe, was a fashionista. At the same time, unlike Zoe, she was not that excited about the upcoming IPFE, since she had already been there before and after modeling as much as she had, the cat could not feel that much hype about the big events. Moreover, getting all excited and emotional was not in Delilah's character. The exceptions from that were rare, yet she was quick to show one of them to the pets as she sang a song, explaining what the International Pet Fashion Expo was like.

Still not knowing how to choose one pet for the photoshoot without disappointing the others, Blythe told about her problem to Emma and Youngmee. In return, she got an advice to put all of the pets' names in a cap, close her eyes and pick one, and that's exactly what she had decided to do. And out of all the names possibly she picked up Russell's. Deciding not to dwell on it anymore, Blythe took the dumbwaiter to Littlest Pet Shop. Once arrived, she got met by Delilah, who seemed to liked her very much as soon as she proved the fact she can understand pets. Then Blythe told the pets about the problem and her decision. As expected, all the pets were upset about it, including Russell, who was the only one not wanting to do a photoshoot. All the pets persuaded Blythe to do a repick, but once again Russell's name was picked. Then the pets decided to pick the name themselves, but it was to no avail, since each and every one of them picked Russell's name out of the cap.

Zoe was definitely not happy about Russell being picked over her, she was totally jealous. But after having a talk with Pepper and Penny Ling, she decided to overcome herself and cheer Russell up by giving him a good advice he needed so much in his situation.

Meanwhile, Mrs. Twombly received the terrible news about Fisher Biskit planning to open another Largest Ever Pet Shop of his. That could be a real threat to Littlest Pet Shop business, so Mrs. Twombly told Blythe she believes in her publicity in the magazine to be an advertisement move and safe the Littlest Pet Shop, casting more stress upon the poor girl's shoulders. That caused Blythe to have another nightmare about Russell totally blowing it at the photoshoot.

After she woke up, she found out that the alarm was set for the wrong time and she was in danger of being late for the photoshoot. She rushed out of her home, only to find out her trailer hitch was gone, so she could not connect her kiosk to her scooter. Mrs. Twombly offered to use the Littlest Pet Shuttle instead, but one of the tires was flat.

While Blythe was screaming in frustration, the suppressed evil laugh of the Biskit Twins could be heard. 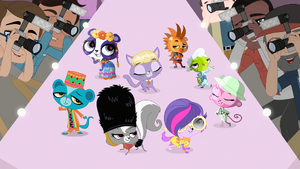