The Expo Factor - Part 2 is the twenty-sixth episode of the second season of Littlest Pet Shop and the fifty-second episode overall.

Blythe finally makes it to the Pet Expo. Unfortunately, the Biskit Twins sabotage her at every turn, making her think her nightmares about everything going wrong at IPFE might actually be coming true. 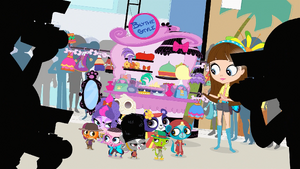