The short begins with Blythe walking into Littlest Pet Shop's day camp, calling for Zoe and saying she has got her outfits for the International Pet Fashion Expo. Instead of a reply, the sounds of squeaking come from the fire hydrant slide. Following those sounds, Blythe finds Zoe inside the slide, chewing on a chewtoy and looking sad. When she asks her for the reason, Zoe says she is having "a crisis of fabulousness", to which a shocked Blythe insists it is not possible and reassure Zoe that, in order to be fabulous, she has to "think fabulous".

Zoe takes her advice and tries to think of the most fabulous stuff she can think of. That makes her enter the alternative reality, where everything is fabulous and the way she wants to see it. That sight inspires her so much that she decides to sing a song about how fabulous she is and how great it is to have a fabulous life style. During the song she dances and turns almost everything she touches into a fabulous version of what (or who) it was before.

When the song ends, Zoe is full of confidence and asks Blythe to give her the outfit. After less than 2 seconds she slides down the slide and says she is back and she is... fabulous! 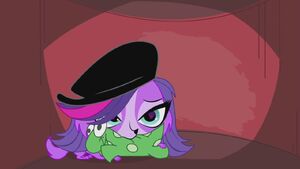