The Hedgehog in the Plastic Bubble

"Russell's losing his quills. Blythe's locked herself in her room with some mysterious illness. It's all too horrible for words!"
—Zoe Trent

The Hedgehog in the Plastic Bubble is the twenty-third episode of the second season of Littlest Pet Shop and the forty-ninth episode overall.

Blythe and Russell find themselves in isolation due to real, but mostly imagined circumstances.

Blythe is busy putting on her shirt while talking to Youngmee about the Fergus & Annabelle book. Foreshadowing the lunacy ahead, Youngmee states that a simple read of the book may make Blythe feel like she is "in the story". Youngmee then emails Blythe the Prince Kissies theme song for immediate download. As it plays, both girls begin squealing with Blythe repeatedly jumping on the bed and Youngmee going in over a dozen circles in giddy abandon. After listening to the download, she realizes she has three red blotches on her head. She searches it up on the Internet, only to find out it is called "Geri-Beri."

Meanwhile, at the day camp, Russell is wearing a mask, asking if he is close. The other pets giggle when Zoe and Minka suddenly come in, alarmed about Blythe's Geri-Beri. Zoe expresses herself by "dancing". The pets giggle some more (not about the Geri-Beri, about Russell), but Russell suddenly bumps into Penny Ling, making her get stuck by a quill. Minka pulls it out and adds it to her collection.

Roger checks up on Blythe who convinces him she is sick. Her dad heads to the airport. Meanwhile the other pets let Russell know that his quills have been coming loose frequently and have resulted in several injuries. To prevent future harm, Russell paints himself red stating that the color will make his friends know to stay away. This does not prevent a curious Zoe from getting stuck by one of Russell's quills when he accidentally backs into her. After whimpering away a short distance, Zoe lets him know she has problems seeing red. Minka removes the quill from Zoe and the dog goes into another spell of dancing.

Blythe decides to download the captivating romance novel and dives in while Russell isolates himself in a Babel of Tupperware outside the pet center to keep his friends safe. Once again this plan goes awry when Sunil tries to enter the plastic fortress by removing a box, thus sending the rest crashing down on him and Russell. Russell's next idea, covering himself in bubble wrap keeps his friends safe, but also restricts him from moving freely and joining his friends for a fresh lunch. Unwrapping himself Russell resolves to leave the pet shop. The other pets panic and take the dumbwaiter up to Blythe's room.

Once there, they find they cannot enter as Blythe weighed down the shaft door with a paperweight. Worse still, reading the novel has made Blythe delusional (or "Demetrius" as Vinnie calls it, based on a personal experience). Blythe refuses to remove the weight and open the shaft door, thinking she is Annabelle and her friends to be Fergus or Stevius or a gloombot (a lackey for the villain in the romance novel). Next, the pets travel to the roof and lower Vinnie along the wall to enter through Blythe's apartment window. Blythe shuts him out, thinking him to be Annabelle's boyfriend Fergus. She continues to fantasize as Annabelle and stops her friends entering through the air duct by blasting the song she downloaded earlier, forcing the pets to retreat and to Vinnie's chagrin, come into point-blank range of Pepper's skunk spray. Blythe subsequently delivers an aside as Annabelle, contemplating a future of loneliness until she hungers for the taste of noodles given a strong Ramen aroma. She exits the room and finds the pets had cooked Ramen noodles to lure her out. Her vampire delusion fades and admits she got carried away just as Youngmee had hinted. The pets tell Blythe that Russell is planning to leave the pet shop. She is at a loss though, fearing her Geri-Beri is contagious until Roger comes home. He deduces that the spots on Blythe's forehead are acne and that the Geri-Beri symptoms are really side-effects from staring at a computer for too long.

This brings Blythe to conclude that Russell's ordeal has mirrored her own and does some research. Blythe enters the day camp and stops Russell, bindle in paw, from leaving and tells him he is going through quilling, a process that occurs a couple of times during a hedgehog's life where a hedgehog loses its quills without intending to. Blythe and the pets celebrate playing in the bubble wrap Russell had brought out earlier. 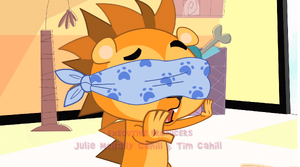