"Um, it was more like a fashion accident."
—Blythe

The Nest Hats Craze! is the second episode of the second season of Littlest Pet Shop and the twenty-eighth episode overall.

Blythe starts a new fashion craze with her wild "Nest Hat" and it is up to the pets to take care of the newly hatched chick (which was previously an egg in the Nest Hat) while Blythe tries to find the chick's mother.

Blythe folds origami versions of all of the pets, but before she can properly chat with the pets about her paper creations, she rushes off to try to get to the fashion show sponsored by Wake Up, People! She gets there on time, but before Ginny Hues, the host, can get to Blythe, the Biskit Twins shove Blythe out of their way to get Ginny's attention, making Blythe crash into a tree and to drop her phone, and a nest lands on her head. Brittany proceeds to smash Blythe's phone by stomping on it. The twins fail to get Ginny's admiration as they had planned and Ginny instead takes a liking to Blythe and her hat. Fashion celebrity Yadon'say gives an approving thumbs-up, making women around Downtown City gather twigs and make nests on their heads.

When Blythe returns to the pet shop, she finds Mrs. Twombly has put a birdcage on her head. She tries her best to walk by with a straight face and heads to the day camp room, where Pepper and Minka want to see the nest hat closer. However, as Blythe puts it down, she discovers an egg in the nest. She entrusts the eggs to the pets as she puts the nest back on her head and scrambles out to look for the egg's parents.

As she heads out the door, she runs into the Biskit Twins again. This time, they are here to tell Blythe that their father has told them to pay back Blythe's phone with their own money. Having borrowed money from Fisher their whole lives, they ask Blythe for advice on making money. When they notice Blythe is constantly receiving letters and phone calls asking about the nest hat, they decide to act as Blythe's PR agents, but Blythe will have none of it. They drag her into the limousine and give her a busy tour among Downtown City's upscale areas, where the nest hats prove to be even greater successes, and despite the Biskit Twins' attempts to hog the spotlight, Blythe climbs to higher heights of popularity, still unable to go searching around for the egg's parents.

Back at the pet shop, Russell has the pets take turns sitting on the egg — Vinnie excluded as he is cold-blooded. The egg eventually hatches during Russell's turn and the baby bird inside declares Russell his mother. He names the bird Hubble and tries to teach him how to fly, but trips over a pillow. Hubble repeats Russell's movements precisely and hurts himself by tripping on the pillow, making him cry.

The Biskit Twins trap Blythe inside a waiting room at a television studio. When she asks why they are going through so much trouble, Whittany points out it is no longer about the money, but them wanting credit for nest hats. They restrain Blythe to a chair using the scarves she wore earlier so she cannot escape as the twins repeatedly ask for luxuries — including a replacement for Blythe's phone, which they withhold from her to milk her fame further. Eventually, Blythe gets so angry that she breaks the chair and sneaks past the twins with a fake-out. Brittany and Whittany give chase, but are tremendously slowed down through picking up their things. The twins crash into Blythe's P.A. and fall to the floor, along with their swag.

Russell notices Hubble is hungry and tries to feed him the pet food he normally eats. Sunil stops him, having found a bird care book. After learning about regurgitation feeding, Russell vehemently protests against doing that, so Penny and Minka find a birdseed bell. Russell tries to feed him the birdseed, but Hubble refuses.

Blythe emerges outside to see birds chasing down people wearing nest hats. She quickly puts her nest into her bag, finds her replacement phone, records a video of the panic in the park, and uploads it. Sure enough, the video rapidly goes viral and convinces people everywhere to get rid of their nest hats. With no one wearing them anymore, the birds gather around the nest hats and use them as actual nests. Blythe meets with Russell and Hubble and puts Blythe's nest back where she found it. Eventually, Hubble's mother comes by and the two fly off together. Russell makes the mistake of sitting on Blythe's head though, thus kicking off the hedgehog hat craze. 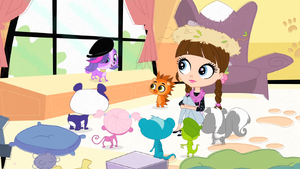