"I'm gonna have to tell Youngmee that you pets just don't like her treats. And when she asks me how I know that, I'll just have to tell her the truth."
—Blythe

The Secret Recipe is the thirteenth episode of the third season of Littlest Pet Shop and the sixty-fifth episode overall.

In order to save their friendship, and save Youngmee's appearance on television, Blythe may have to divulge her secret.

The episode starts with Ms. Amster announcing the last presentation of the Young Entrepreneurs Week, performed by Youngmee, with help of her best friend Blythe. She presents her new product "Youngmee's Tasty Pet Treats." After it received a good feedback from the class and the teacher, Ms. Amster encourages her to make it into a real product. However, there is just one problem.

Littlest Pet Shop's day campers were playing games, listening to the music and enjoying themselves when all of sudden, Buttercream ran in, screaming about being poisoned. As the others soon found, the so-called poison was nothing else but "Youngmee's Tasty Pet Treats." At first, the pets were excited to hear that she was making pet treats, but when Blythe went to check on Youngmee and discovered that she wanted the Littlest Pet Shop pets try some of her treats, she, being concerned with Buttercream's reaction, had to ask the pets to pretend they like the treats. It was not long before they found out why they had to pretend: those treats were "anything BUT a treat".

Excited to see the other pets liking her treats, but not having a clue about the truth, Youngmee decided to take her backing to the Bear Cave show and rename them into Buttercream Bunny's Pet Bites. No matter how hard Blythe tried to hint her on the fact that her treats were not that good, Youngmee was too fixated on her big idea to notice what happened around her. In despair, Blythe tried to reveal her biggest secret to her, but failed to do so as the fear of losing her friend took over. Unfortunately, while coming up with excuses, Blythe accidentally hurts Youngmee's feelings, putting their friendship in great risk. However, she still managed to give Buttercream some of the treats she baked according to the rabbit's tastes and recommendations.

Later in the television studio, Youngmee had discovered the treats Blythe gave to Buttercream, but due to having no time to get rid of them, had to put them in her pocket and go to the scene. During her performance, she gave some of her treats to the rabbit, who just spit the out. Coming up with the excuse of Buttercream just being "a bit camera-shy", Youngmee saw no other choice but to take on the risk and try giving Buttercream Blythe's treats, which were eaten quickly and happily. That fact made her realize her friend was not trying to sabotage her and was just being a good friend after all. However, how exactly she knew that Buttercream did not like the treats was still beyond Youngmee.

After the show ended and Blythe had a chance to talk to Youngmee without any other human being hearing them, she revealed her secret in front of Buttercream and the other pets because she could not let Youngmee think she did not believe in her when she did. The pets confirmed Blythe's words by nodding their heads to Youngmee. In her turn, Youngmee had shown herself as a good friend as well, giving Blythe a guarantee that the secret will stay safe with her.

Blythe: You're a genius, Vinnie. Be right back!
Vinnie: Did you hear that?! Ha ha! I'm a genie!
Russell: Genius.
Vinnie: Well, thanks! 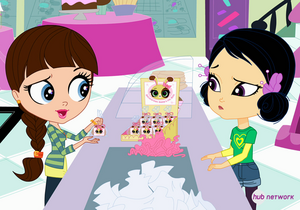 Click here to go on The Secret Recipe image gallery