"Wouldn't it be hilarious if Lady Never-Laughs over there really could hit us with her wacky jungle voodoo?"
—Pepper Clark

A jungle curse shrinks the pet shop to the size of a doll house. Meanwhile, a little girl thinks that the miniature pets are toys. It is now up to Blythe and Zoe to rescue them. 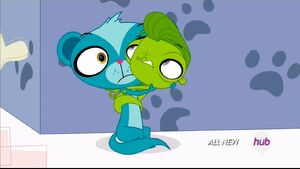