Topped With Buttercream is the fifteenth episode of the first season of Littlest Pet Shop.

The pets fill up on one too many treats when they are stuck in the sweet shoppe's pantry with Youngmee's Aunt Christie's pet rabbit Buttercream.

One day, Blythe has been working on a Zoe standee to show off a brand new fashion she has made for her. However, as Zoe knocks it over and criticizes it, Youngmee bursts into the pet shop to announce she and Blythe will be neighbors. Blythe does not understand until Youngmee forces her to run outside with her and brings her nearby to a new shop called Sweet Delights while explaining it is going to be run by her aunt Christie. This means they will get to see each other even more than they do now.

It is then Aunt Christie walks out from the shop while in the middle of a conversation. She stops to talk with the girls before she gives them a brand new sweet candy she has made and asks them to tell her what they think of it before she asks how Buttercream is doing. Blythe insists she is behaving well and that the other pets like her.

Buttercream is busy dancing and playing with the others. They give her an official welcome while explaining that they even got a secret hole to transfer them between the shops so they can visit each other whenever they want. Speaking of, Penny asks if they could go then and they want to right away, but Russell is concerned since it could be dangerous. However, they decide not to waste their time with it and quickly rush on over.

Meanwhile, work is going on inside the sweet shop. Aunt Christie is checking on everything and she is informed that she may be done by Friday. Since it is later in the day, the workers all decide to head home and just in time since the pets have just arrived. They are all very impressed and Buttercream shows them the kitchen, the place where everything gets started and she offers to let them try some of the ingredients. Unknown to all of the pets, the doors behind them shut and lock.

Outside of the sweet shop, Blythe and Youngmee are sitting around with their smoothies, discussing how much fun they will have now. Eventually, the discussion takes an awkward turn and they decide to hang out at the pet shop.

The pets are still dining on the items their coming across, but begin to find themselves very full and ready for a nice nap, some even getting put into strange sugar induced fantasies and sorta jittery from having digested too much sugar. As Russell tries to get out, he realizes the door is stuck.

Blythe goes to check on everyone, but finds them missing and she informs Youngmee, who thinks the pets could not have been stolen. Then some friends come by to invite them to go out to eat with them. But they agree to help Blythe until she hears Mrs. Twombly and goes out to distract her. She wanted to take the dogs out for a walk, but Blythe stops her by getting her to discuss the pet food and asks to see something of hers. However, she leaves to search for it, so Blythe and the others run back into the room trying to look for any clues of the pets.

Upon seeing a hole, Blythe tries to go through and call for the pets after she spots Buttercream's ribbon on the other side of the hole but struggles because of her head. She then asks to be let into the sweet shop, but Youngmee informs her she doesn't have a key on hand.

Meanwhile the pets back at the sweet shop are beginning to get angry and impatient while locked in this room and they begin to argue about wanting to be the leader of this "new territory", as well as arguing over who gets what and so fourth.

Youngmee travels around the town in hopes of finding her aunt for the sweet shop key. At the pet shop, Blythe is still in a panic, not made any better due to what Jasper keeps saying.

As the pets proceed to grow increasingly violent, Vinnie suddenly snaps out of his sugar-high state and realizes what the cause of all of this hyper behavior, fighting, and anger was. It was the sugar. With this in mind he tries to tell the others in hopes of snapping them out of it too. At first, Buttercream is suspicious and accuses him of just trying to trick them, but all of the other pets begin to snap out of it one by one and inform her that they always get along with each other. While she remains wound up and refuses to believe it, Penny manages to convince her otherwise and they join the other pets once again.

Youngmee has finally tracked down her aunt Christie and asks her for the key so she and Blythe can get something they accidentally left behind. She manages to find the keys and Youngmee takes off. They find the locked door and with enough yanking they manage to get it open and finds all of the pets messy and covered with sugar.

At Littlest Pet Shop, everyone is explaining what had happened to them as Blythe sits nearby. While the experience may have been bad, she points out they made a new friend out of this entire mess. Then she shows them the icing pops Youngmee's aunt sent over, but when the pets see them, they all run for it. Blythe, not understanding what exactly happened, simply shrugs it off and begins to eat one of the icing pops.

Minka: How dare you! Wait, what? 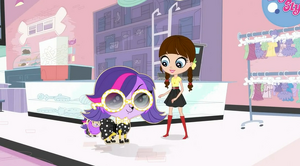 Click here to go on Topped With Buttercream image gallery