Trading Places is the fourteenth episode of the first season of Littlest Pet Shop.

Zoe asks for Penny Ling to share her feelings about a pet shop camper named Digby. Meanwhile, Russell hides inside Blythe's backpack and gets lost at her school.

While most of the pets are busy playing with a ball, Zoe is romantically discussing her crush with Penny Ling. She recalls the last time he has been there and when asked if she has ever told him, she claims she would but every time he is there, she is not. Zoe mentions he is to come to Littlest Pet Shop tomorrow while she has "a freckle" dealt with and she screams so loudly, the people blocked their ears.

The next day, Zoe has bandaging covering her nose. She asks Penny if Digby asked about her, only for her to reveal he was not there. When he suddenly comes in, Zoe hides and tries to speak with Penny in private. It is then Blythe arrives, showing her brand new backpack she got and how much it can fit inside of it. While going on about it, she does not notice Russell thinking about how great school is. Blythe then takes off as Russell gives chase, hopping into her backpack as she runs out the door. The others are concerned, but they decide to just try to cover for him.

Meanwhile, Penny is trying to convince Zoe that her zit is really no big deal. Zoe is too worried to risk finding out whether or not Digby would be superficial about her problem, but she is suddenly inspired by an idea and once again yanks Penny somewhere else.

On her way to school, Blythe is discussing her next fashionable idea with Roger: A backpack that could hold a pet. When she suddenly sees Russell in her backpack, she tries to get her father to turn around, but none of her excuses work since he has everything she asks for on hand. Because they cannot turn back, Blythe scolds Russell once they get out of the car. After multiple instances with crowds running around her, Blythe's backpack goes missing.

She quickly locates it, but upon opening it up, she finds Russell has gone missing. Then she looks to realize she grabbed Brittany's backpack instead of her own. As Brittany screams, she sees Russell and chases after him while switching the backpacks. Before she can locate him, the class bell rings and she is forced to go to class.

At the pet shop, Zoe explains to Penny what she wants done. Penny promises to do it because of her, but really thinks Zoe should be brave enough to do it herself. She grabs some cards Zoe wrote for her to say and tries to tell Digby what Zoe thinks.

Meanwhile having avoided the janitor, Russell has found himself in the nurses office with the twins. He somehow lands right in front of them, making them run screaming from the room. Russell is nearly cornered by the janitor, but he slips on the recently waxed floor, allowing him to escape.

Later at lunch, Blythe keeps trying to find Russell. She digs around, under, and through whatever she can find and then asks if anyone has happened to see a hedgehog. Of course, she is ignored, so while she sits with her friends she tries to explain what is going on, but with mixed effects.

Penny has finally finished speaking and Digby asks her why Zoe just cannot tell him herself. She tries to, but since Zoe is not there, Digby decides he would like to get to know her for the time being. As Mrs. Twombly announces it is snack time, the group try to get a convincing Russell made and make Minka distract Mrs. Twombly. She manages to get her to leave after grabbing one of her doorknobs and throwing it around.

At school Blythe thinks she may have finally found Russell. However, it turns out to be a rat instead.

Zoe spies on Penny and Digby, growing angrier and more jealous by the minute while trying to hide herself so Digby does not see her. As she lands, the others miss take her lower half for Russell and decide to use it to aid them in distracting Mrs. Twombly.

At school, Blythe has managed to find Russell and he agrees he is ready to head back to the pet shop now. After she runs into the janitor again, Blythe's backpack goes flying through the air but luckily, he does not see that she has Russell with her. However, he does get the rat, unaware that a million more have been all over the school.

Blythe calls for a taxi and they rush to Littlest Pet Shop, where they are painting Zoe's lower half to look like Russell and just in time, as Mrs. Twombly has just returned with the snack.

Meanwhile, Blythe is stuck in traffic so she takes off and grabs a ride with a bike, then eventually with a make-shift skate board. Blythe and Russell make it back just in time and he is able to appear just as Mrs. Twombly gives him his snack.

But because of how he tossed Zoe out of the way, she runs right into Penny and lands right in front of Digby. She tries to hide her nose until Digby assures her that she is lucky to have such a great friend. However, he has to leave now, but not before he kisses Zoe's nose. This makes her very happy and as she comments on it, she sees that the other girl pets have put bandages onto their noses as well. 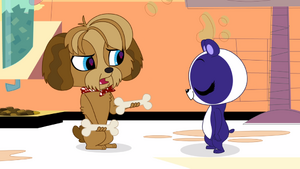