Two Peas in a Podcast

Two Peas in a Podcast is the fifteenth episode of the fourth season of Littlest Pet Shop and the ninety-third episode overall.

The pets worry when they believe Penny Ling will be moving away. After watching Blythe's success in vlogcasting, the Biskits try to create one of their own.

The episode starts off with Blythe, who was with Zoe, doing a video vlog. While she discusses with a caller, the Biskit Twins become jealous by what Blythe was doing recently. Brittany becomes jealous while Whittany cannot take her eyes away from it. Noticing that Blythe's video vlog got about a million hits, the Biskit Twins decide to create their own video vlog.

At Littlest Pet Shop, Penny Ling and her owner arrived and sees Mrs. Twombly eating an onion that makes her eyes water and sneezes at the same time. Her eating also took effect on Penny, who also had her eyes watered. At the day camp, the pets wondered on what was going on Penny's mind. Vinnie tells Penny what is wrong. Penny told the pets about her weekend, but when she told them she and her owner are moving, the pets are in disbelief. While the pets argue about this urgent situation, Penny wonders about what she just said while the pets worried.

Meanwhile, the Biskit Twins start their own video vlog with their introduction. They get their first caller in, but ends up with the twins suggesting to watch Blythe's video vlog. The next caller, which was Fisher, told them that their form of social media was rolling smoothly, much to the twins' motives. Fisher promises the girls to attract more viewers for Largest Ever Pet Shop. After their video vlog, the twins ended up with 2 views, disappointing Whittany.

The pets embraced around Penny as Russell, Sunil, Vinnie, and Minka worried about what she said. Before she can at least talk about what happened earlier in the episode, Zoe comes along with a list of thing that Penny wanted to do. Since she cannot tell the pets the truth, thanks to Zoe, Penny agrees on doing as much fun as possible and they all hug again.

At Downtown City Junior High, Blythe tells Youngmee and Sue she has been invited to an unnamed internet show and the limo may be scheduled for pick-up later on, much to her friends' suspicion. Back at Littlest Pet Shop, she gets picked up by François. At the Biskits' mansion, Blythe is excited for her opportunity for improvement, but instead meets with the Biskit Twins in their bedroom, where their video vlog set is located. Thanks to Blythe, the Biskit Twins are getting dozens of viewers and positive feedback, but then ignored callers who wants to chat with Blythe; they get a surprise when even Mrs. Twombly calls them. After their vlog, the twins make a proposal to have Blythe featured on their vlog series, but Blythe declines their offer.

At the day camp, while eating some bamboo, Penny asked anyone if they want a bite, but Zoe says that even when they are offered, some of themselves do not have a better tummy. After Penny finished eating, she decided to get some rest, which was the next thing on the list. However, after dreaming on what she said about being moved away, accompanied with the pets, she wakes up in a jolt. When Russell took a look on his watch, he tells Penny that her favorite show Picklebabies is on television, much to the pets' disapproval.

Back at the Biskits' mansion, the twins continue their vlog, even when Blythe was not involved. The Biskit Twins decide to improvise to in an effort to get more viewers by having Brittany disguised as Blythe. Despite their efforts, they ended up with negative feedback.

During her vlog, Blythe got a call from Youngmee, who told her urgently to switch to the Biskits' vlog channel. When Blythe saw one of them in disguise who are trying to get some positive feedback, she decided to confront the Biskits for impersonation.

At the day camp, Penny Ling is enjoying watching Picklebabies while the others are exhausted. When Penny tries to tell the pets about what she said, Pepper told her that the show was back on, meaning Penny does not know how long she can keep her truth that long.

Blythe heads toward the Biskit Twins and demands Brittany to give up her disguise. She tells them to knock it off because she does not want them to treat social media on their terms. To make matters worse for the twins, Fisher tells them to put their vlog series to a halt.

Back at Littlest Pet Shop, the pets discuss with Blythe about the fact that Penny may be moving away. Penny decides to tell the pets the truth: She and her owner are moving to a bigger and better apartment on the same building. Penny then says she enjoys on all the attention while doing everything that was from the list and states that sometimes that she wanted something special. The pets agrees on Penny's statement, despite having her truth looked controversial.

Zoe says that the bottom line shows Penny was not moving away and Russell approves as the pets start to cry. Penny then gives Blythe one request, which is to tell Mrs. Twombly to stop eating onions. By the end of the episode, Blythe and the pets start to bawl tears.

Penny Ling: No But you... you don't understand [She sits on the cushion looking at the pets in panic] Oh, guess I'll have to wait until everyone settles down [He starts laughing] Ha! Ha! Ha! If i were moving away. It's nice to see how much everyone would miss me.:
Pets: Penny Ling is moving away!

Vinnie: [Cries And Weeps] It did, but now that you're leaving us Forever... [starts sobbing] ...I'm really going to miss it! [Vinnie continues to Crying]

Zoe: I guess the bottom line is that we're very happy, You re not moving away, Sweetie!
Russell: We sure are...
[The pets start to cry]
Penny Ling: [in tears] Blythe, I do have one request
Blythe: [Sniffle, weeps] What's that, Penny Ling?
Penny Ling: [Sobbing] Could you please get Mrs. Twombly to stop eating those onions?
[As they cry again, Blythe starts crying louder and louder] 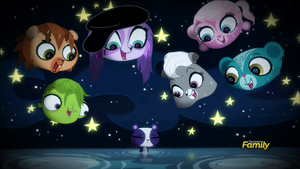