"Well, Zoe fell in love, so she left forever to go be a nurse at the vet's office."
—Minka Mark

Un-vetted is the ninth episode of the fourth season of Littlest Pet Shop and the eighty-seventh episode overall.

Zoe develops a crush on the new veterinarian's German Shepard. Meanwhile, Blythe and Russell spend the night camping on a freezing mountain.

Roger is sleeping, dreaming about landing Air Force One. Blythe shows up, delivering breakfast in his bed, but after telling Roger to wake up, he wakes up in panic. After Blythe delivering breakfast, especially his own airplane morning slippers, Roger questions on why she being so nice to him. Blythe told Roger if she can go to Mount Gigantor, the place where Mona Autumn has found inspiration for Tré Blase Magazine, for a year. Roger suggests to visit Mount Gigantor for one night. The exchange goes back and forth until Blythe agreed to go to Mount Gigantor for a night.

At Littlest Pet Shop, Mrs. Twombly tells Blythe if she can take care of Russell, since his owner, Mr. Owens, is attending for the Bingo-athon, which Blythe agrees. Blythe then walks in to the Day Camp when Zoe holds Blythe's leg. When Blythe told Zoe on what's wrong, Zoe asked her that she wanted to hide her because Mrs. Twombly was going to take her to the Vet office for a checkup tomorrow.

On their way to Mount Gigantor, Russell questioned on what exciting thing that he, Blythe and Roger might see once they arrive at Mount Gigantor. Russell wanted to see the Mountain Goats who can walk through walls with their sticky hooves. Blythe believed that they're not real, but Russell admit that they are real, after himself and Zoe seen them on the Animal Channel.

At the vet office, after Mrs. Twombly pulled Zoe inside, Zoe thought this place wasn't that bad. After a vet follows Mrs. Twombly to the checkup room and prompted her to place Zoe to the examining table, the 2 walk off to fill in the paperwork. Zoe thought it can take more than a vet to worry her. But after seeing giant scissors, a drill, and sharp needles, Zoe decided to get out of here, unaware she was caught by a German Shepard.

At a nearby town where Mount Gigantor was at, Russell told Blythe if a guide was recommended since Mount Gigantor is too dangerous to go there. Blythe told Russell that when Mona went there one time, she traveled here with no guide, and a use of a harness with the approved safety permits. Roger showed up and said it will be a Father Daughter Hedgehog bonding time as they travel to Mount Gigantor. He proceeded to move on, but hits a snow pile instead. Russell questioned to Blythe if it is okay to go to Mount Gigantor without a guide.

"Are you sure we don't need a guide?"
—Russell

At the day camp, with Zoe love struck about Handsome Face, Penny, Pepper, and Minka are all excited. Penny tells Zoe on who was equally cute so they can can compare their level of cuteness. Zoe suggested herself, even though Handsome Face was more handsome than cute.

Zoe: I have to say me, though he was more handsome than cute. Penny, Pepper and Minka: (Sighs)

Sunil and Vinnie questioned if it is more handsome than this, and Vinnie showed his muscles while Sunil does an Indian sitar dance. Pepper told the boys if they are jealous, to which Sunil and Vinnie claim they are not. Zoe knew that the only way to see Handsome Face again is when she shows up for checkups. Vinnie told Zoe that she can only show up for a checkup if she is sick or injured, thus Zoe was getting an idea.

While trekking at Mount Gigantor, Blythe asked Russell of its going well, and Russell said that, judging between Blythe and Mona, everything's fine. Blythe then told Roger of they already passed that craggily thing, but Roger said not to worry, and that he has a map so he will know where they are at. Unfortunately, the wind swiped that map off of Roger's hand. Blythe checked if they have food, but the bag was empty, and told Roger that he was supposed to pack up food before they set off. Tiger told Blythe that, at the very least, they have sleeping bags so they can stay warm, but he accidentally throw them off the cliff.

Back at the day camp, the pets asked Mrs. Twombly to come here. Twombly asked on what is wrong and the pets pointed at Zoe, who pretended to be sick. Noticing that she not feeling well, Twombly decided to take Zoe to the vet, and on her way to tell Youngmee to be in charge of the shop temporarily.

"And the best acting award goes to... Zoe!" - Pepper Clark

At Mount Gigantor, Blythe was pondering on what Mona was capable of doing just fine at this freezing mountain when Roger showed up and told her that he has something to show her. As he was setting up a trap, Roger told Blythe that he was watching a show called Super Duper Stay alive Man, which stars Dirk Dirkens, a tough man who gave out tips on how to survive. He demonstrated by setting a snare in order to capture a predator, but the snare hits Roger instead, much to Blythe and Russell's expense.

At the Vet office, after checkup from the Vet, Handsome Face shows up again to checkup Zoe, started by telling her to count backward from W, with Zoe not having much effort. Handsome Face then questioned Zoe about her condition, to which she said she is dizzy and was weak on her knees. After further chatting, Handsome Face then told Zoe to rub a sock on her head and call him in the morning. Zoe was then picked up by the Vet, thus Zoe has taken a leave.

In Can't Give Up, Zoe meets Handsome Face several times after pretending to get hurt or sick while Blythe, Russell, and Roger are doing their best to survive at Mount Gigantor.

At the day camp, Penny started to worry about Zoe, who was at the vet office several times. Sunil has suggested that they must go to the Vet so they can check in Zoe, much to Minka and Pepper's interest. The pets got out of the day camp and pretended to be sick, and Youngmee, now in charge of the shop temporarily, has noticed the pets are sick and decided to take them to the Vet Office.

After the pets arrived at the Vets office, they overhead the conversation between Zoe and Handsome Face. He tells Zoe if she wants to be her nurse. Zoe agrees, much to the pets's state of shock. Zoe asked on what they are doing, and Penny said that she and the pets are pretended to be sick so they can check on Zoe. Pepper then said if the pets worry for Zoe to stay with Handsome Face for good, amd Zoe responded that she will, because Handsome Face was not only that she's the love of her life, but also her soulmate.

Despite their best efforts, Blythe, Russell, and Roger are not having any effort for survival and Roger yelled, "You failed me, Dirk Dirkens!". His yell was so loud that he creates an avalanche and they run into the cave, where the snow traps Blythe, Russell, and Roger in. Suddenly, there is a noise coming from the cave and Roger faints. The noise was from the mountain goats, and one of them, Tinsey Nougat, told them that in order to get out of the cave, they have to go though it, to which included 2 bathroom breaks. Blythe, Russell, and Roger are now getting on the mountain goats as they proceeded to go through the cave. After getting out of the cave, Russell was excited on getting out of Mount Gigantor, but not Blythe. She said that she did not last at least one night, while Mona lasted a year. However, Tinsey said that Mona's assistant only lasted a year, thus Mona didn't went there, much to Blythe's disappointment. Russell consoles Blythe, saying that they had a great adventure after all this time trekking Mount Gigantor, and Blythe approved his opinion.

As Blythe and Russell returns to the day camp, she sees the pets feeling down and questions if she missed anything. Minka told Blythe that Zoe feel in love that she's going to stay at the vet office with a German Shepard, much to Blythe's disbelief.

At the day camp, Penny and the pets were so glad Zoe returned. Blythe promised she has to double check the facts before doing something crazy when Russell sneezes. Russell said that he got a cold while trekking the mountain. Blythe decided to take him to the Vet Office. Towards the end of the episode, Zoe wanted to come with Blythe, but the pets won't let her, making Zoe worried. 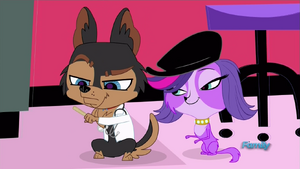