Vincent[1] Alfonso[2] "Vinnie" Terrio is a male gecko with a talent for dancing.

He is not very smart, but still tries his best at whatever he does, even if it ends up going a bit differently than expected. He is a top-notch dancer but he is prone to messing up due to being clumsy. This clumsiness is generally caused by his own tail, though he also regularly trips over things or falls on top of other pets. He is best friends with Sunil.

A somewhat goofy gecko, Vinnie can be a little bit loud and excitable, but he is a good friend to the other pets and tries to play things cool.

Vinnie is portrayed as the least intelligent of the main cast, often unable to understand different situations or know the meaning of certain words or phrases. Despite this, he can give out good advice occasionally and has had several good ideas over the course of the series.

He loves to dance and cannot stop himself from doing so, but he also has a loss of balance usually caused by his tail, and as a result, he often ends up tripping, breaking things, or ruining something else. It is shown in Frenemies that the loss of his tail makes him a better dancer.

In Blythe's Crush, Vinnie is shown to have a jealous side when he was trying to get the better of Esteban.

Vinnie is generally quite mellow despite everything as he commends Esteban for saving the pets, even though he lied to them in Blythe's Crush. This mellowness is also shown in Why Can't We Be Friends?, where he tells Weber the pets are still his friends in spite of them having earlier reprimanded him for recklessly chasing a fly.

Vinnie Terrio was designed by Hasbro designer Kirsten Ulve in 2011.[3] One of the original illustrations shows Vinnie had pink irises, less hair on the back of his head, a shorter tail, and wore a golden necklace and an earring.

The bonus "A Look Behind The Pet Shop Doors" featurette from the DVD "Little Pets, Big Adventures" revealed that, prior to January 2012, he was named Tony.[4]

A toy concept art for a Happy Meal toy with the name "Tony" was made by Christine Veverka, bearing the description: "loud & proud; sweet; wide-eyed; Think Travolta from Saturday Night Fever. Lady gecko's man with a strong Brooklyn accent. Heckuva dancer, knows a ton of moves- but his knowledge really doesn't extend to anything else." Its design had pink irises, eyelashes and the same earring as before, but it lacked the chest hair and featured a brown cap.[5]

He was eventually named after Deney Terrio, who was the host of Dance Fever.[6]

His officially released design is a green gecko with a big segment of deep green on his chest and stomach. He has tiny green freckles between his eyes and noticeable hair slicked back on the top of his head. His eyes are a very dull shade of purple-gray. 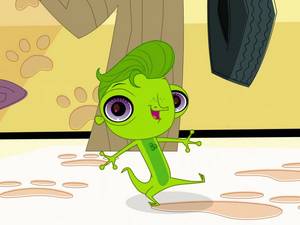