What's Next? is a Littlest Pet Shop animated short published by the Hasbro Studios featuring Blythe, Russell, Zoe, and Minka.

The scene starts at the the Pawza Hotel, where pets and their owners were enjoying on the pool. Blythe, along with Russell, Zoe, and Minka, was also there, relaxing in her chaise-lounge and drawing some new designs on her mobile tablet. Zoe, thinking back to the Pet Fest day, could not help but congratulate Blythe once more on such a great achievement. However, she then starts to wonder: What's next? She proceeds to ask Blythe about that. After all, there is such a great world full possibilities out there. She was soon joined by Russell and Minka. The idea seems to really catch Blythe's interests and she soon loses herself in the thoughts about what she could possibly try doing next. Her fantasy turns out to be musical number, which Russell, Zoe, and Minka are more than happy to be a part of.

In the end, Blythe comes to a conclusion that it does not matter where she will go or what she will do, as long as she is with her pet friends by her side, she will have a great time. 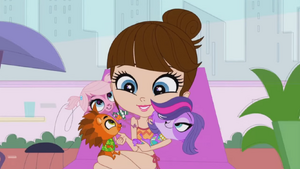 Click here to go on What's Next? image gallery