What's So Scary About the Jungle? Everything!

What's So Scary About the Jungle? Everything! is the seventh episode of the third season of Littlest Pet Shop and the fifty-ninth episode overall.

As Blythe is restocking and organizing a bowl of doggy treats, Mrs. Twombly receives a phone call from old friend Tess McSavage, a famous zoologist and host of Secrets of the Wild, who says she'll visit Mrs. Twombly in the Littlest Pet Shop as part of her break from work. When Blythe hears about this, she heads to the day camp, where Penny Ling and the other pets are watching Tess's show, which seems to be mostly about how much she appreciates animals. Penny in particular is ecstatic to hear the news, as she's a fan of Tess and Secrets of the Wild, and prepares herself to hug Tess upon arrival. In short time, Tess knocks on the door of the Littlest Pet Shop, and Mrs. Twombly invites her in. Tess and Mrs. Twombly have a discussion about what they've been doing, but Tess seems to nervously giggle frequently. Blythe then brings Tess into the day camp, where she introduces each of the regulars. When Penny comes out of hiding behind Pepper to come up and give Tess a hug, however, Tess screams in terror and rushes out of the building entirely, sending Penny rolling away and getting her head stuck in a box. Once Penny dislodges herself, she becomes overwhelmed with thoughts about her perceived hideousness and starts crying, Vinnie inadvertently exascerbating her misery with badly-worded support.

After taking a quick power nap, Tess meets with Mrs. Twombly and Blythe in a back room. Mrs. Twombly and Blythe try to ask her about what happened in the day camp with Penny Ling, but Tess either has blocked out her memories involving Penny or is refusing to acknowledge such a thing happened. Tess, in addition, makes sure Blythe knows she is not afraid of bears by showing her a slideshow of photos of her hanging out with dangerous species of bears, then leaves the room giggling.

Back in the day camp, Russell does some thinking and concludes that Tess behaved as she did not because of Penny Ling as an individual, but that she's afraid of pandas as a whole. While no longer crying, Penny takes offense to that statement but follows along with Russell's plan to disguise her as a gorilla anyway, as a test to see if Tess is afraid of Penny or pandas in general. Penny outs on Pepper's gorilla suit, and she and Russell discuss their plans with Blythe at the front room. Blythe introduces Penny in the gorilla suit, but before Blythe can say anything, Tess once again leaps up in fright and scrambles far away. At this point, Penny has convinced herself that there is something unknown but scary about her, and she runs crying into the day camp. This second incident piques Blythe's curiosity, and she pulls out a tablet, searching for anything related to Tess McSavage and gorillas. The first article she finds reads that Tess visited a gorilla sanctuary and soon uncharacteristically fled screaming and has been in seclusion since. However, the article also says the gorilla that supposedly frightened Tess is currently at the Downtown City Zoo, so Blythe heads over there to find the gorilla and get some answers.

After some searching, Blythe finds the gorilla who traumatized Tess McSavage. She introduces herself as Sunshine Sweetness, and when Blythe asks if she knows anything about Tess McSavage, Sunshine shows Blythe Squeezy, a panda plush toy of hers that strongly resembles Penny Ling, and explains what happened: After spotting a bunch of bananas, Sunshine put Squeezy down to not get him messy, but when she's eating, Tess finds Squeezy and picks it up. Sunshine hears Tess's chattering and becomes furious, charging up to Tess and roaring, which scared Tess so bad that she fled the sanctuary completely. Sunshine also tells Blythe that she has since calmed down and is more willing to share Squeezy with others now. With knowledge of what happened, Blythe whispers into Sunshine's ear a plan.

At the Littlest Pet Shop, the pets have already figured that Blythe would have a plan and convince Mrs. Twombly to take the bunch of them out for a walk, leading Mrs. Twombly to the zoo. Blythe, meanwhile, has already led Tess into the zoo, but they gets sidetracked by a pair of fans who won't leave her alone. Luckily for Blythe, the fans keep Tess occupied for long enough for Blythe to meet Sunshinealone, who says she has misplaced Squeezy and can't find her. Tess finally catches up to Blythe but sees Sunshine, recognizes her, and cowers behind Blythe. Blythe tries to explain that this gorilla meant no harm, but Tess questions Blythe on how she could know such a thing. Blythe fumbles for an excuse, but the Littlest Pet Shop pets come barging in with Mrs. Twombly, relieving her of having to answer. The pets hear of the missing Squeezy, and Russell proposes to split the group up to search. Instead, Penny lingers around, hearing an angry Sunshine and figuring she needs a hug. Blythe tries to talk Tess into going back to the gorilla exhibit but fails, and Mrs. Twombly suggests they leave the zoo before Tess is traumatized further. Blythe, however, looks over and sees Sunshine has calmed down. She and Mrs. Twombly approach the exhibit and see that Sunshine is cuddling something—upon a closer look, Mrs. Twombly realizes it is Penny.

Tess, knowing the dangers involved with Penny in that situation, heads into the gorilla exhibit itself, sneaks past some sleeping gorillas, and tries to communicate with a defensive Sunshine. Tess finds Squeezy behind a bush in the exhibit and hands it back to Sunshine, putting Penny down. No longer afraid of gorillas or panda bears, Tess sees Penny, finally acknowledges her and picks her up. Penny gives Tess the best hug she's ever had and leaves from the exhibit feeling refreshed. Tess asks Blythe how she figured all of this out, and, unable to give a good answer, calls over the same fans from earlier to distract her.

Everyone returns to the Littlest Pet Shop, where the other pets shower Penny with questions. When Vinnie asks if she was afraid, she says that she thought about what Sunil and Vinnie might do and did the opposite.

Main article: What's So Scary About the Jungle? Everything!/Transcript 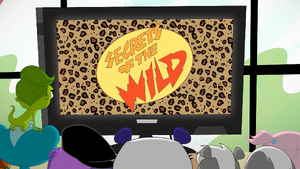 Click here to go on What's So Scary About the Jungle? Everything! image gallery