What's in the Batter?

"What if while I was baking last night, my necklace accidentally slipped off into the cupcake batter?"
—Blythe Baxter

What's in the Batter? is the eighteenth episode of the first season of Littlest Pet Shop.

The Biskits order two-hundred cupcakes for their quarter-birthday and a sleepy Blythe is unaware that her new necklace fell into the batter.

Blythe, Sue, and Jasper are discussing their plans for later when they happen to see Blythe's father. This surprises her since he was not supposed to be home, but after he explains it, he hands over a small box. He got her a present, but Blythe is confused when she sees it is a candy necklace. He explains he got it for her since he always used to when she was younger, then hands over another box and claims it to be her true gift. A gold necklace that Blythe recognizes as one of her designs. He explains he had a jeweler make it for him and after Blythe gives him a hug, he asks to have the candy necklace, which she happily hands over while watching him chew it.

Later that evening, the Biskit twins are discussing how glad they are that it is the weekend. They arrive at Sweet Delights and when Youngmee tries to help them, they tell her off before going on to check the shop out. They then begin to discuss their new plans to throw a party while a confused Youngmee watches.

In the back of the sweet shop, Buttercream is showing the pet shop group the brand new mixing machine they recently got in. She then shows them how fun it can be and how it works, but Minka gets an idea and begins to make a mess with the mixture after she turns the machine off instead. They find Penny Ling licking it and she suggests they all try it, which they do.

As the Biskit twins continue to look, they realize they may not be able to throw a party since they do not have a real reason such as a birthday coming up. However, they decide they can throw a quarter-birthday party and begin to inform Youngmee of their request. They want two hundred cupcakes and want them made by tomorrow. She tries to tell them that because this is such a big request, they would have to confirm it with her aunt first. However, when the twins threaten to leave, she quickly reconsiders and writes down the order.

They then leave and immediately bump into Blythe while the pets watch. The girls angrily refuse her any acceptance to their party since she spilled their drinks on them. However, Blythe does not feel upset, which annoys them, but they leave anyhow while deciding to go uninvite others.

The pets angrily walk back while expressing the Biskit twins' rude behavior, though Minka stays behind to look at Blythe's pretty necklace. However, Blythe makes her leave as Youngmee comes back in, having just put on an apron. Blythe comes to the counter to show her and explains how she got it as Minka continues to observe from nearby. Youngmee is impressed, but is worried she may not be able to make all two hundred cupcakes for the twins' quarter-birthday party and explains she was left in charge while her aunt is busily attending to other things. Blythe is able to guess what the event it and offers to help Youngmee, mentioning they should invite Sue and Jasper also.

When they arrive the four get to work baking all of the cupcakes until evening strolls along. Everyone (other than Youngmee) is beyond exhausted and is finding it hard to focus. As Blythe turns on the mixing machine, she almost falls asleep while leaning against it and as a result, is unaware that her necklace has fallen in!

Come morning, Blythe is woken up by the pets. They came to make sure Minka would not wake Blythe up, but she really wants to see Blythe's necklace. She tries to reason with them, but it does not work and Russell points out that the sooner she shows them, the sooner she gets to sleep. They point out she is not wearing it and when Blythe checks her bed, she cannot locate it.

Later on, she tries looking under her mattress and explains to the pets that she checked over the entire apartment. The pets mention that they checked the shop and Buttercream has checked over the entire Sweet Shop. However, no one has managed to find anything helpful. Blythe begins to theorize that her necklace may have fallen into the batter, but Buttercream mentions that Aunt Christie has already taken the cupcakes to the Biskit's place for their party. Blythe goes on to mention she is not allowed over there, but she cannot just give up her special necklace and asks them to help her out.

At Sweet Delights, Blythe informs a very sleepy Youngmee about what happened. She is less then thrilled by the aspect of having to bake another two hundred of them, but Blythe doesn't see any other options. They need to get the batch back and replace it with new one's. The girls try to make the brand new cupcakes, but they end up coming out less then desirable and just a big mess.

Meanwhile, at the party, everyone is hanging out and having fun while the twins text each other. They are enjoying the party and decide to split a cupcake when Blythe's necklace falls out of it. They begin to think it may be a present from their father, but this annoys them as they think it is just a cheap piece of junk and not very special. As they begin to theorize that perhaps the other cupcakes may have presents worth checking out, Blythe and Youngmee try to come inside to switch the cupcakes, but the security stops them until Blythe explains they came to deliver more cupcakes.

Inside of the cart, the pets begin to bicker and the girls try to quickly switch the cupcakes. However, they are caught by the twins. They scold Blythe for not staying away, then proceed to scold Youngmee for her rude manners. Blythe and Youngmee explain why they are so tired and claim they only brought the brand new cupcakes to the party to be nice, which neither twin believes. So they walk off to have a conversation with one-another.

They find it suspicious and claim that Blythe and Youngmee want the old cupcakes because of the "gifts" and the four girls begin to fight each other for the cupcakes. However, due to them shaking the bin, it makes the pets fall out and a mess. They use this time to search for the necklace while eating the cupcakes that have fell.

Eventually, Blythe explains why they were really there and the twins reveal the necklace to her and claim they thought it was from their father. This makes the pets angry and Minka jumps onto them to take the necklace back. Once they insult her enough, Blythe and the others leave after she tells the twins off. Neither Brittany nor Whittany seem to think they did anything wrong though, so they simply begin to text each other again.

No songs were featured.

Sunil: A necklace can't just disappear.
Pepper: Pssh. Not if you're trying to make it.
Sunil: Do not be a hater.

Zoe: This is a good song, but you know what this party really needs? A singer!
(Zoe opens her mouth to sing, but a girl can be heard screaming. Zoe covers her mouth in shock.)
Zoe: Did that come out of me?!
(The girl is shown screaming in their direction.)
Zoe: (to Vinnie) She must be screaming about you, because I'm a cute little doggy! 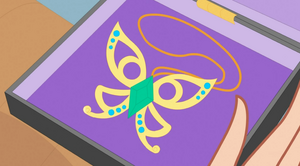 Click here to go on What's in the Batter? image gallery