What, Meme Worry? is the seventh episode of the second season of Littlest Pet Shop and the thirty-third episode overall.

Sunil's picture on the web becomes a viral sensation, sending Zoe into fits of jealousy and the Biskit Twins into fits of vanity.

Youngmee and Jasper are visiting Littlest Pet Shop. Sunil is afraid of getting a nail cut when he imagines some of the horror of getting the nail cut, every pet have been nailed cut except him. When he was going to get nailed cut, Jasper gives advice for him to not be scared of getting the nail cut. However, the advice still does not get the worries out from Sunil's mind. Jasper takes his worried face as a picture and uploads it to the web (where people are uploading and sharing it with each other), captioning it, "Worrying Mongoose Knows How You Feel!". Not after a few minutes it already got 4 thumbs up already. After a while, Jasper was hungry so he leave the pet shop with Youngmee.

Outside, seeing the Sunil meme making each people who is looking at the gadget to give the thumbs up of it is Sunil's worrying face picture. That night, Jasper calls Blythe to inform her that Sunil's meme is getting popular by having the 121,000 thumbs up. The picture was even published on the "How many thumbs" website (a website that watches another website) where people in the world can see the picture of Sunil.

The next morning, Blythe shows the pets her laptop with Sunil's picture, which already has a million thumbs up. However, Zoe does not believe the thumbs up is already reaching at that rate of number. All of the pets discuss Sunil's fame, which Zoe thinks is ridiculous. Sensing Zoe is jealous, Pepper talks with her about her feelings of jealousy about Sunil's sudden fame.

On the other side, the Biskit Twins were also getting jealous, seeing the popularity of Sunil's picture getting so many likes. This gives them an idea; since they "know" they are cute, they are going to do a music video with the help of Monsieur LeGrande, hoping it will get many thumbs up too. At school, they have given the school televisions, saying it is a donation from Largest Ever Pet Shop, but everyone in the school must watch their music video and give it a thumbs up. Every student is forced to watch the musical video of the Biskit Twins.

In Blythe's room, Zoe begs her to have her become popular like Sunil, but Blythe refuses. Suddenly, Jasper arrives, showing the video of the Biskit Twins, saying that it was getting a lot of thumbs down. The video was played, and Zoe starts to howl as the Biskits are singing. Quickly, Jasper takes a video of Zoe and uploads it to the web. The video was getting many likes (thumbs up). Zoe's video became more popular than Sunil's and she apologizes to him for her behavior. She knows that all she needs to do is help herself become famous. On the other side, the Biskit twins were angry and threw their laptop away because of the negative reception from their music video. Their butler stated there is 1 thumbs up from the video, soon revealed to be Mrs. Twombly who liked their video. 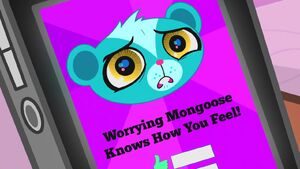 Click here to go on What, Meme Worry? image gallery