What Did You Say?

What Did You Say? is the nineteenth episode of the first season of Littlest Pet Shop.

When Vinnie falls into a garbage can and is accidentally transported to the city dump, the pets ask Blythe to help, but they find out she is sick and can no longer understand them.

One stormy day, Roger is busy eating when he hears noise coming from the hallway. A sick looking Blythe walks in and he grabs her some natural medicine he is sure will make her feel better. It turns out to be very nasty, but she is able to focus and wake up a bit more. He sends her to bed, but Blythe heads right for Littlest Pet Shop to inform Mrs. Twombly she is too sick to come that day.

Upon arrival, she finds the pets playing. They happily approach her and begin to make all sorts of strange sounds. Blythe struggles to understand them, and even tells them to stop doing this, but they are not. This makes her realize she cannot understand them.

As the pets are playing, Vinnie has been following a fly behind the shop. Just as he corners it in a big trashcan, he falls instead and gets covered in dirty remains of items inside of it. As Penny Ling turns to see him and comments how he smells, she explains how weird Blythe is being and she was sent to find him so that all of the pets could discuss the situation. She leaves once he informs her to tell the others he would be in shortly.

As Penny returns in, she finds Blythe making many attempts to fix her hearing. She tries to get them to speak to her, but it does nothing to help. So she tries to fix it by making loud noises, such as playing with squeak toys or banging a trashcan with a dog bone over her head. However, after so many failed attempts, Blythe has no idea what to do. The pets begin to worry and try to think of what to do also.

Then Mrs. Twombly comes in to find Blythe. She informs her that she is sick and Mrs. Twombly sends her out of the pet shop and suggests that she gets right into bed.

Vinnie continues to chase after the fly, but this proves futile when a trash truck comes by and scoops the trashcan he had been in into its back, sending him to the dump. At first, Vinnie is concerned, but when he sees a bunch of flies he becomes very excited until realizing he cannot catch any of them. He runs into a pile of garbage and makes the giant object on top fall off. Before it can crush him, the flies all gang up and manage to pull him out of harm's way. Vinnie is so happy that he does not want to eat the fly anymore. He tells it that they should be heading back now and it shows him the way back home.

The pets have followed Blythe into her bedroom. She does not understand why she does not hear the pets speak normally anymore, then happens to notice that Vinnie is not there either. When she asks about it, they all shrug. Blythe goes on to tell the pets she is going to get some rest and assumes it has something to do with why she is sick. After she passes out, the pets go over where Vinnie is and decide to leave after she begins to snore.

At the trash dump, Vinnie and the fly continue to search for something recognizable to get out of there. He happens to notice something whiz by, causing much alarm until the mysterious figure gangs up on him. It is a trash rat and his group and he already knows what happened to Vinnie since it happens all the time. At first, Vinnie thinks they were going to harm him, but it turns out they really want to help him out.

At the pet shop everyone is playing cards while they resume speaking about Blythe. They all have different ideas on how to fix her, such as eating her favorite snack, relaxing her smelling glands, releasing a giant deadly snake in her bedroom, and dressing her in a frilly outfit while she puts on a musical number surrounded by boy dancers.

Russell claims all they can do is just wait for the cold to go away and Pepper mentions that Vinnie is still missing.

Vinnie explains where he lives and he follows the rat. Eventually, they come to the dump entrance and the rat tells Vinnie to stay close and keep moving, as in, to follow him the entire time. Otherwise, he is liable to come across trouble. They are chased by a bird until they manage to make it run into a mail box. Then they are confronted by three angry dogs.

In her bedroom, Blythe asks for her father to bring orange juice, soup, and the medicine. After he leaves, she thinks about how sad she feels, missing the fun she has with the pets.

As the pets try to find where Vinnie has gone, Vinnie meanwhile is still following behind the rat. They have reached the better part of town but are now surrounded by a bunch of people walking and playing nearby. Just when he thinks he can no longer move, Vinnie sees that they are just across the street from the Littlest Pet Shop, which makes him happy.

Until a little girl swipes him up and brings him into her bedroom.

After having been forced to dress up in a pink, girly dress, Vinnie scolds himself for getting caught the way he did. He makes an attempt to escape, but the book on top of the glass bowl he was forced into is too heavy for him to lift. So with nothing else to do he sits down, until the girl comes in and takes him out to play with her doll. She then yells at him and has him stay there while she goes to change for the party she plans to hold with "Princess Precious".

It is then the fly and rat come in to save Vinnie, but the little girl catches them and turns on her ceiling fan. After they let go, they are thrown outside while the girl bawls about having lost her brand new pet.

Roger comes to check on Blythe and she comments on how she doesn't feel nearly as sick as she was. He checks her forehead and deduces that while she is still worn out, she lost the fever she had. However, he believes she should have one final dose of the nasty natural medicine. Blythe really doesn't want it and compares it to old nasty icky socks. Roger checks the bottle and informs her it is not made of such things, but he does list the funny side effects to her, which causes much alarm to Blythe in realizing that the medicine was making her struggle to speak to the pets.

Roger decides to take his leave after he informs her that he doesn't plan on giving her anymore of the strange medicine and tells her to just get rest while they stick to giving her fluids. She gets dressed and takes off for the Pet Shop, informing everyone that she has just found out what was going on. When they do not react, Vinnie suddenly appears and everyone runs over to speak to him. Pepper asks him about the dress and he demands to be called "Princess Precious." Though none of them agree to this and Blythe embraces him while she mentions how much she missed speaking to them. However, when Vinnie questions this, everyone begins to laugh while the rat and fly watch from outside.

Main article: What Did You Say?/Transcript

Roger: Listen to the weird possible side effects! May impair ability to juggle, knit sweaters, properly polish silver, rebuild car engines, wax surfboards, ride a unicycle, and the ability to understand pets.
Blythe: What?!
Roger: I know, nobody rides a unicycle anymore. 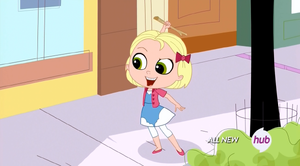 Click here to go on What Did You Say? image gallery