In Paris, Penny Ling and Vinnie look at a café's menu. Vinnie complains to the waiter about the lack of his favorite "French eatables", like french fries and french toast. Penny Ling asks for the waiter's recommendation, which would be the daily special.

While waiting, Penny Ling gazes at the romantic city's places of interest, giving information about the Eiffel Tower and the Louvre, and Vinnie spots a mime.

The waiter comes back with a tray of snails, to the pets' confusion. He then explains that is the daily special: escargot.

Penny Ling and Vinnie get alarmed with the people about to eat the snails. They run off and throw every tray on the ground, finishing with the snail tank. They tell the snails to save themselves and run away, but they are too slow to escape.

Vinnie decides to help them by sticking them to himself and Penny Ling follows. Both scream at the sight of each other covered in snails and run away.

The fantasy ends with Penny Ling and Vinnie running by Littlest Pet Shop's counter while Blythe and Russell watch. Blythe comments that she knew it was a mistake to let them play in the snail terrarium. A snail with a mustache is thrown at Russell's forehead and says, "Bonjour!". 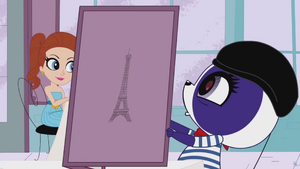 Click here to go on Where'd the Escargot? image gallery