Whiskers and Sideburns are feuding cousin koalas who so far only appeared in the episode Feud for Thought. They are voiced by Peter New(Whiskers) and Lee Tockar(Sideburns). The toyline gives their names as Whiskers Ryan and Sideburns Walker.

Whiskers and Sideburns are koala cousins who, as quoted by Vinnie, "Barely even talk to each other." At the beginning of the episode Feud for Thought, they divided the room in half with chalk. The cousins then made the other pets choose sides. Russell, Vinnie, Minka, and Zoe sided with Whiskers. While Penny, Pepper, and Sunil sided with Sideburns. 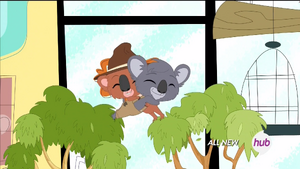 Click here to go on Whiskers and Sideburns image gallery

Retrieved from "https://lps2012.fandom.com/wiki/Whiskers_and_Sideburns?oldid=48623"
Community content is available under CC-BY-SA unless otherwise noted.