Wiggles McSunbask is an green-skinned alligator who debuted in Alligators and Handbags.

At first, Wiggles was a bully – not only to his owner, but to the pets in the shop as well, not allowing them to play anywhere and simultaneously tearing up toys and furniture. It took Zoe to stand up to him after he made Penny Ling cry. As it turned out, he was only pretending to be a bully because he felt it would not be right if a big creature like him got pushed around. In reality, he is really a nice, gentle, and sensitive alligator.

He was present at the Pet Jet in Blythe's Big Idea during Pet Friendly Skies in which he went skydiving and yelled, "Geronimo!" and among the crowd of troubled pets in Tongue Tied. 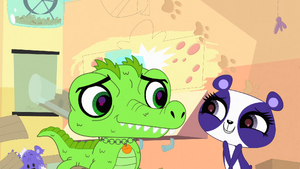