Youngmee Song (송영미)[citation needed] is one of Blythe's best friends, who she met during her first day at Downtown City High, along with Sue Patterson and Jasper Jones. She is also one of the only two people to be aware of Blythe's secret ability to talk to animals (the other one is Roger).

Her aunt is Christie, a woman who runs a sweet shop named Sweet Delights.

Youngmee is a somewhat soft-spoken, but intelligent, girl. Blythe finds her almost encyclopedic knowledge somewhat creepy. Youngmee is also a very good student, as seen in Feud for Thought. However, she is fairly sensitive to criticism, as she became saddened when Blythe implied her pet snacks weren't as good as she thought.

Youngmee appears to be Blythe's closest friend since her move, as Blythe spends the most time with her out of any of her friends. Blythe trusted her enough to reveal her secret to her in "The Secret Recipe". She is also shown to be odd and has irrational fears in some episodes.

Youngmee is a girl of Korean descent with pale colored skin and somewhat slanted violet eyes.

She wears her black hair up in low buns with two pink-violet flowers. She wears a green shirt with a heart design on the front and yellow sleeves, black flat shoes and shorts and violet leggings. 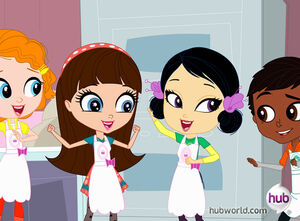