Zoe Trent is a dog with a talent for acting and singing. She is Pepper's best friend. She loves being the center of attention and being in the spotlight, but she is also a diva with a hidden kind heart. Her owners often like to enter her in dog shows, and she has a sister named Gail.

Zoe is a true-blue diva and fashionista who cannot help but take an opportunity to sing or dance or just show off, especially when her favorite song Dance Like You Know You Can comes on as shown in Gailbreak!. Unfortunately, when this happens, all of her common sense flies out the window and usually gets her into trouble.

Her biggest quirk is that she can be a drama queen who speaks with overly-fancy airs or mannerisms to seem smarter and classy, as well as cause her to overreact when hurt or sad. Due to her behavior though, Zoe tends to accidentally act rudely to others without any ill-will or mean intentions, such as criticizing someone openly, feeling it was better to be honest. When someone is accused of saying something mean, the statement is often directed at her first. She also displays minor air-headed tendencies now and then, such as "losing" her hat when it is actually on top of her head, not being able to tell her own breed apart, and once admitting she sometimes forgets she is a dog.

However, Zoe is also a true friend and cares a lot for others. She will try to help them however she possibly can, and adores her family above all else. She is also very aware of how sensitive Penny Ling is and became enraged when Wiggles McSunbask bullies Penny to tears and confronts him.

Zoe Trent was designed by Hasbro designer Kirsten Ulve in 2011.[1] One of her original illustrations shows Zoe had a lighter fur, no streak in her hair, red lips, wore no beret and a different collar.

Another illustration shows her with darker fur, bluish-gray hair and an olive eye, wearing a small top hat.

The bonus "A Look Behind The Pet Shop Doors" featurette from the DVD "Little Pets, Big Adventures" revealed that, prior to January 2012, she was named "Lady Ra Ra."[2]

She has ice blue eyes, lilac colored fur and lighter purple markings along her face, eyelids, and chest. Her ears are a violet-purple colored and resemble hair, matching the spiked tuft of bangs she has, with a single streak of pink in the center. She usually wears a black beret on her head, along with her diamond studded gold collar. She also has a mole on the right side of her lower lip. 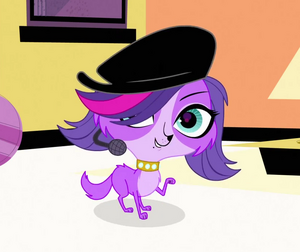